The Toyota Sequoia and Toyota 4Runner are iconic SUVs designed to take on challenges without compromising reliability and driver comfort. While both are equally sturdy, each has a different personality and style. I’m Zabrain, a mechanical engineer with a deep passion for cars and a love for driving manuals.

In this article, I will compare Sequoia vs 4Runner, and see which one suits you better.

The Sequoia is a full-size SUV, whereas the 4Runner is a mid-size SUV; however, there are much better alternatives to choose from that offer great value for money. Between these two outdated SUVs, I would personally go for the 4Runner. Alternatively, I would choose the Suburban.

Main Differences Between the Sequoia vs 4Runner

The main differences between Toyota Sequoia vs Toyota 4Runner are:

Overall, the main difference between the Toyota Sequoia and the Toyota 4Runner is the size. The 4Runner, as mentioned earlier, is a mid-size SUV, whereas the Sequoia is a full-size SUV.

Which one is better? Well, both are great, considering their design intent. Let us have a closer look.

The Toyota Sequoia, as a full-size SUV, offers a seating capacity for up to 8 adults and that without cramping the last-row passengers. Moreover, it gets ventilated and heated front seats, rear-seat controls, a powered sunroof, rear cargo 12V power outlet, an automatic powered liftgate, and a dual-glove compartment.

In terms of power, the Toyota Sequoia is powered by a 5.7-liter Hemi V8, which pumps 401 pound-feet of torque and 381 horsepower, which is standard on all Sequoia trims; the fuel economy you get is 13 mpg in the city and 17 mpg on the highway which is ridiculous.

Read the following guides to learn more about the 5.7 Hemi Longevity and the most common 5.7 Hemi problems and solutions.

Moreover, the Sequoia is capable of towing a maximum of 7400 pounds, which means you can easily haul medium to large trailers and recreational items. The Sequoia comes loaded with creature comforts, such as Apple Carplay, Android Auto, navigation system, Amazon Alexa connectivity, push-button start, Smart Key (standard on all trims), and a premium JBL audio system.

The 2-inch monotube shocks not only tackle challenging terrains but also provide more comfort for the rear passengers. Furthermore, the TRD aluminum skid plate not only protects the powertrain during off-road ventures but also adds a stylish look to the vehicle. The TRD Pro Sequoia also gets an upgraded exhaust which lets you show off your V8’s sound.

Pros and Cons of Toyota Sequoia 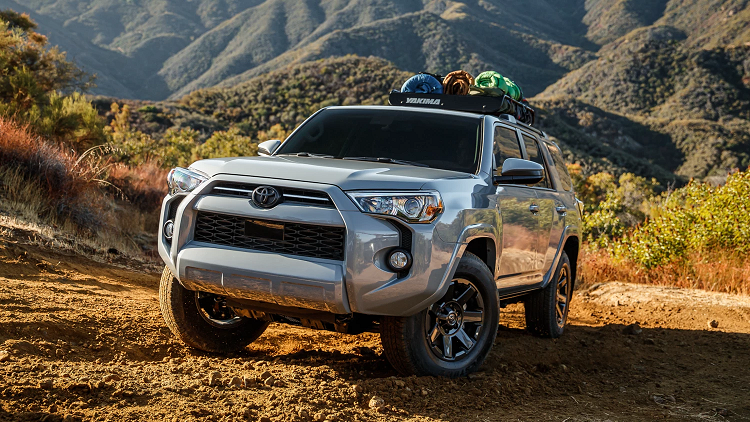 The Toyota 4Runner has been on the market since 1984, and it is still going due to its excellent overall value for money. The 4Runner comes with a 5-speed automatic transmission coupled to a 4.0-liter V6 which produces 278 pound-feet of torque and 270 horsepower, which is standard on all 4Runner trims; this engine offers a fuel economy of 16 mpg in the city and 19 mpg on the highway. The towing capacity is set at 5000 pounds which is enough to haul small to medium trailers and utility items easily.

Regarding safety, the National Highway Traffic Safety Administration has awarded an overall 4 out of 5 stars for safety rating, with four stars for front impact, three stars for rollover protection, and five stars for side crash protection. Similarly, the 4Runner was able to score the top Good score from the Insurance Institute for Highway Safety on four different crash tests.

Overall, the Toyota 4Runner is a great off-road, mid-size SUV that offers a complete package for a family of 5.

Check out how Toyota 4Runner compares to other competitors:

Pros and Cons of Toyota 4Runner

Other Alternatives to Consider

The Sequoia and 4Runner once used to be the best-in-class SUVs, but since they did not get a complete makeover, they have lost the race to other SUVs, which have upgraded themselves with modern look and technology.

Now the Sequoia is a full-size SUV, and the 4Runner is a mid-size SUV, so we will check out alternatives in both of these segments.

For full-size SUVs, you can consider the Ford Expedition, Chevrolet Tahoe, and Chevrolet Suburban, which are all full-size SUVs. Let us have a brief look into each of these.

Based on the Silverado, the Chevrolet Suburban is a huge SUV with enough room for passengers in the third row. Moreover, it got the latest design update back in 2021, and for the 2022 model, it gets upgraded with minor cosmetic changes.

The Suburban manages a fuel economy of 15 mpg in the city and 20 mpg on the highway, and considering its size and performance, it does pretty well. You can get up to 13 cameras with the Suburban to help you deal with it on narrow roads. Furthermore, it gets forward collision warning, lane departure warning, lane assist, rear and park assist, automatic emergency braking, automatic high beams, and following distance indicator as standard for the 2022 model year. 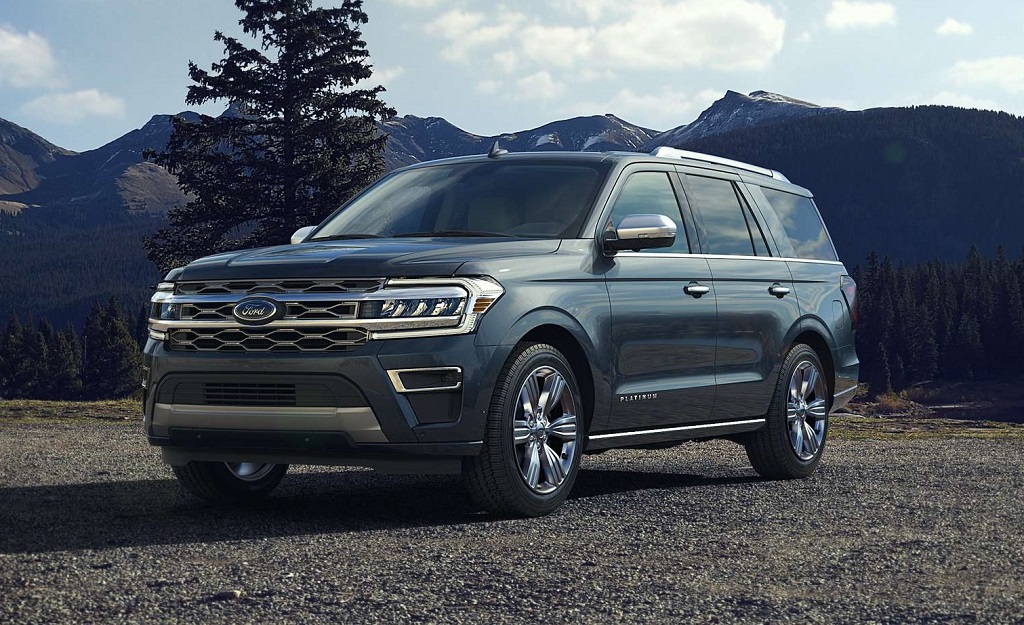 Next in the full-size 3-row SUV segment is the Ford Expedition, which comes with a 3.5-liter twin-turbo V6 coupled to a 10-speed automatic that produces 470 pound-feet of torque and 375 horsepower. The same engine is tuned to produce a staggering 510 pound-feet of torque with 440 horsepower in the top-of-the-line trims. The fuel economy managed by this V6 is 17 mpg in the city and 23 mpg on the highway, which is much better than what you get from a Toyota Sequoia.

In terms of technology, the Ford Expedition is the only full-size SUV to offer hands-free driving; with the addition of BlueCruise technology, Ford adds driverless driving on selected highway routes that have been fed into the system. These “Blue Zones,” as Ford calls them, are spread up to 100,000 miles on the highways in Canada and the U.S. 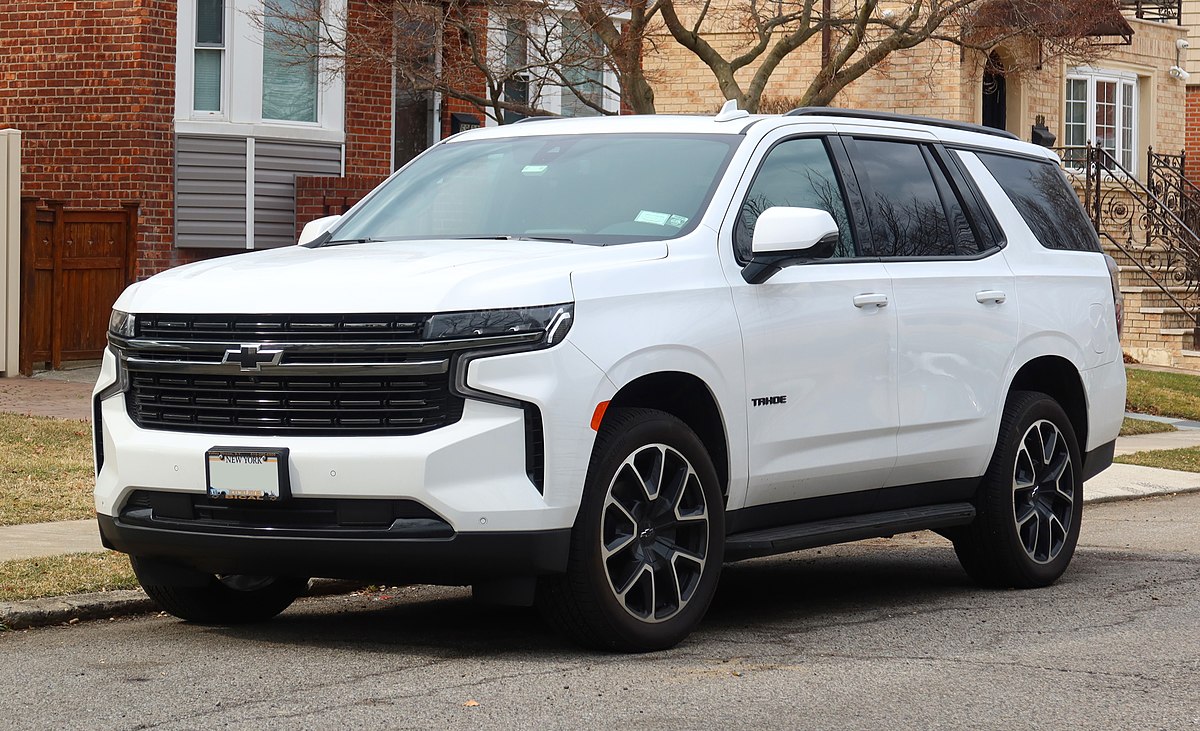 The Tahoe is still a full-size SUV, with a cargo space of 25.5 cubic feet behind the third row, which jumps to 72.6 cubic feet when you fold the third row and up to a maximum of 122.9 cubic feet behind the first row, which is much more than what the Sequoia offers. The legroom is also roomy for adults in the rear seat, measuring 34.9 inches, while the front and second-row seats offer legroom of 44.5 and 42 inches, respectively.

Overall, the Chevrolet Tahoe is a great pick for people who find the Suburban too large to drive. Moreover, its terrific suspension, ample cargo space, and loads of integrated tech make the Tahoe a great SUV.

Getting on to mid-size SUVs, we have the Jeep Wrangler and the Ford Bronco as alternatives to the Toyota 4Runner. Let’s have a close look at each of them.

The Jeep Wrangler is an iconic mid-size SUV designed to take on the roughest terrains without compromising on fun. With a foldable windshield and removable top and doors, the Wrangler is the only SUV in the segment to offer so much freedom in enjoying off-roading. In comparison to the 4Runner, the Wrangler offers a total of 5 powertrain options, starting from a 2-liter turbo to a monstrous 6.4-liter Hemi V8, but the towing capacity is limited to 3500 pounds.

It even offers a hybrid option which has been recently added to the lineup. The fuel economy ranges from 13 to 22 mpg in the city and 17 to 29 on the highway for the fuel-only trims, whereas the hybrid trim offers the best-combined gas mileage at 49 mpg-e.

While the Wrangler is best at tackling off-road adventures, in doing so, it compromises driving comfort and technology. Similarly, its cargo space and legroom are much smaller than what you would in competing SUVs. Overall, the Jeep Wrangler is the best pick for drivers who spend most of their time exploring the beaten path. 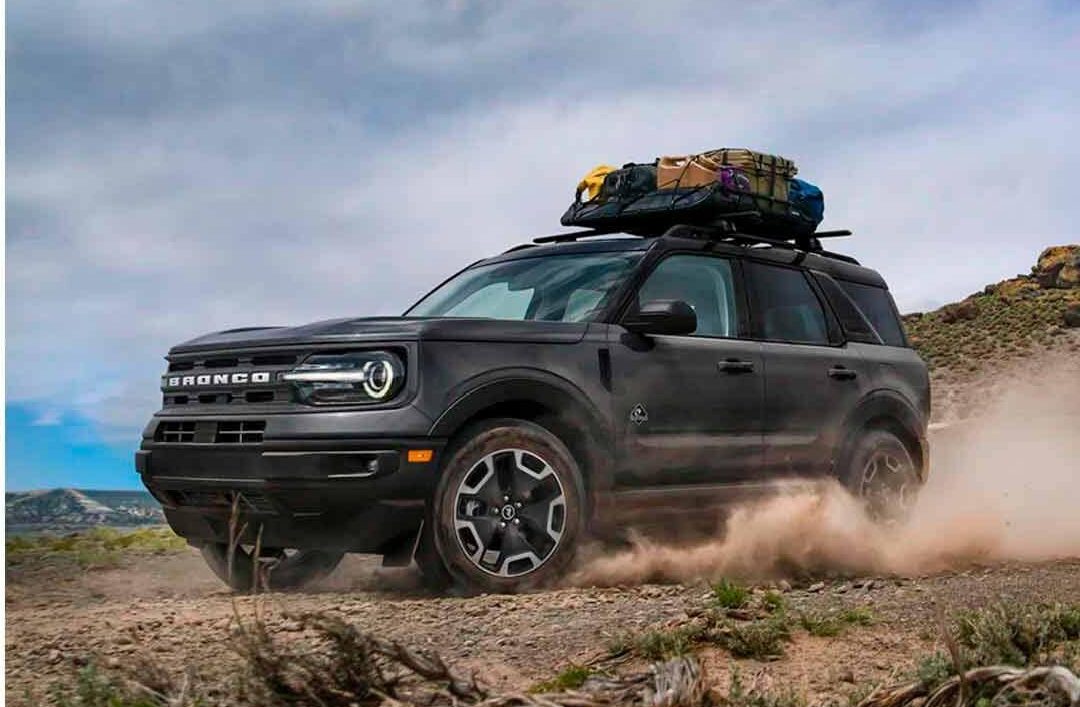 The standard towing capacity with Bronco is rated at 3500 pounds, while with the Bronco Raptor trim, it increases to 4500 pounds. Overall, the Bronco does great as a mid-size off-road SUV, but just like the Wrangler, it lacks the refinement of a daily driver due to wind noise at highway speeds.

Now, let’s check out some of the most common questions people ask when comparing a Sequoia with a 4Runner.

Question: Are sequoias as good as 4runners?

Answer: Both Sequoia and 4Runner are designed as highly durable and reliable SUVs with a focus on extreme off-road capability. While the 4Runner is a mid-size SUV, the Sequoia is a full-size SUV that offers a more powerful engine and greater cargo and passenger space.

Question: Is the Toyota Sequoia larger than the 4Runner?

Answer: While the 4Runner is designed to carry a family of five, with cramped rear seats for two more, the Toyota Sequoia steps in with a more powerful 5.7-liter V8 and a seating of 8 adults.

Question: How many miles will a Sequoia last?

Answer: The Toyota Sequoia will easily hit 300,000 miles with regular maintenance and decent driving habits. However, this range can increase if you continue to take good care of your vehicle.

The Sequoia and 4Runner almost follow the same characteristics; they both are reliable and durable, both offer average technology, and both have abysmal fuel economy. The only difference is between the seating capacity and the engine required to carry their weight. If you are a family of 5, then the 4Runner is fit for you, while a bigger family would be comfortable with the Sequoia.

The Toyota Sequoia and 4Runner once used to be the best in their segment, but due to their aging design, they have lost the race to other SUVs. The Toyota Tundra received a complete makeover in 2022, and the same is expected from the Sequoia and 4Runner in 2023, which may turn the tables for Toyota, but for now, they are far behind, and there are much better options to go with.

Zabrain Arshad
Zabrain has a passion for adventure and exploring places others don't go very often. It's only natural that his favorite type of vehicle is a 4x4. He loves bringing that passion to 4x4 Reports and staying connected to the vehicles and adventures he loves.