An average sedan provides a simple commute from point A to point B, but when you are planning to cross rivers and mudholes, you need something gnarly to keep you pushing through your adventure. And for that, we have Toyota’s iconic SUV vehicles, the FJ Cruiser, and the Toyota 4Runner. Although the FJ Cruiser has been discontinued in the U.S, you can still buy it in the Middle East.

I’m a mechanical engineer with a deep passion for cars and a love for driving manuals. In this article, I will compare the Toyota FJ Cruiser vs 4Runner, check out a few alternatives, and then help you decide which one suits you the best.

The FJ Cruiser and the 4Runner are the same under the hood. However, the FJ Cruiser lags. The FJ Cruiser has aged in terms of looks, efficiency, and technology, whereas the 4Runner, as a mid-sized, 4-door SUV with modern features is a more practical choice.

Main Differences Between the Toyota FJ Cruiser and Toyota 4Runner

The Main Differences Between the Toyota FJ Cruiser and Toyota 4Runner are: 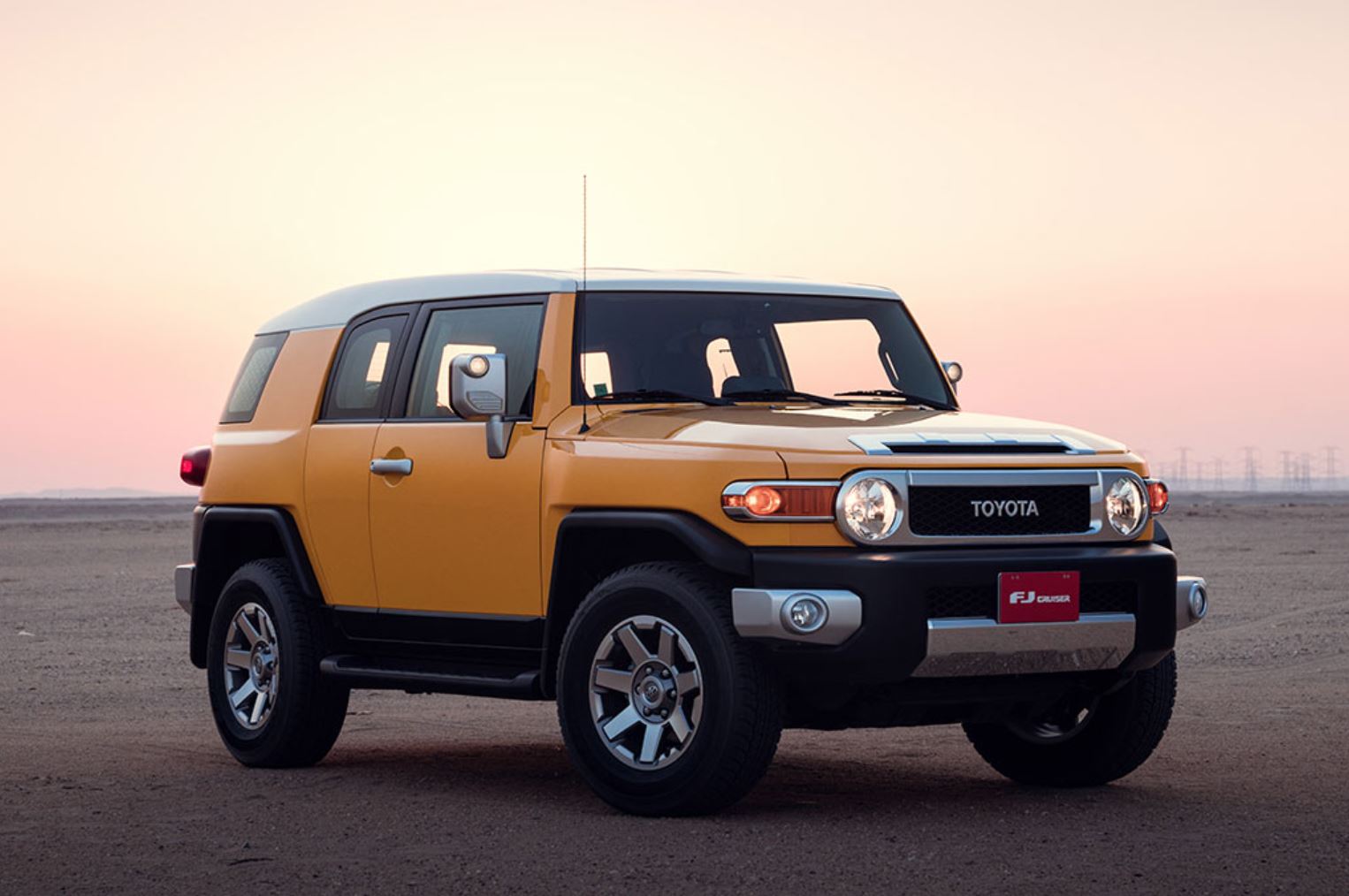 The FJ Cruiser is a retro-styled take on the original FJ40, which once used to be Toyota’s most sold vehicle in the U.S. For the 2022 model, the FJ Cruiser carries the original old design, with minor cosmetic changes.

The engine has remained the same throughout its lifetime; a 4.0-liter V6 coupled with a 5-speed automatic transmission which produces 281 pound-feet of torque and 270 horsepower and offers a maximum towing capacity of 5000 pounds. And to help you cover long distances, the FJ Cruiser now comes equipped with dual fuel tanks (23 gals and 19 gals) with a total capacity of 42 gallons.

For maximum trailblazing, you can get the FJ Cruiser Adventure trim, which gets tuned Fox suspension, Borla performance exhaust system, Bushwacker fender flares, and a 2” lift kit, while 17-inch alloy rims are standard on all trims.

Overall, the FJ Cruiser is an old contender in the mid-sized, off-road SUVs, which due to its outdated design and basic features, does not stand a chance in today’s competition. 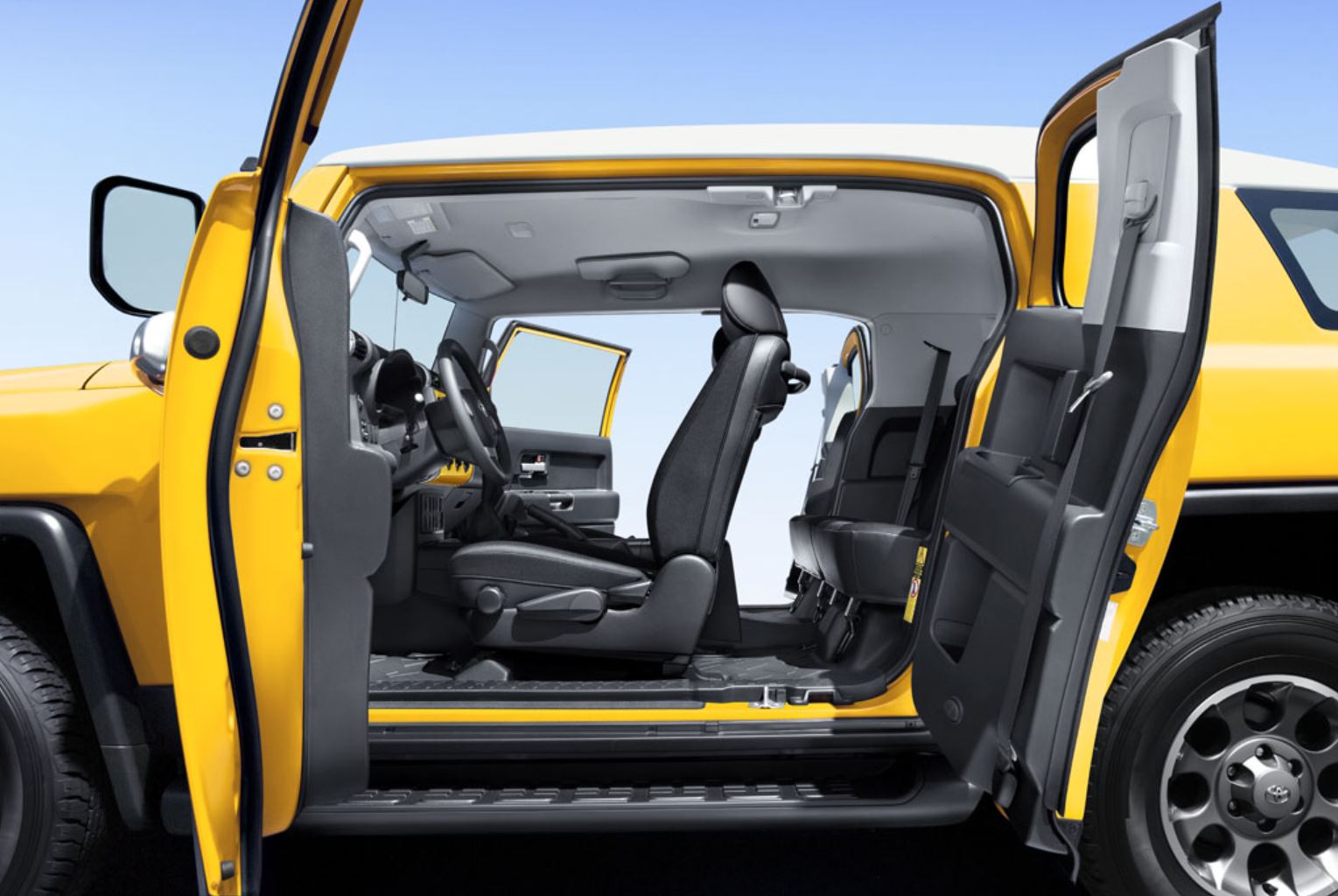 Pros/Cons of the Toyota FJ Cruiser 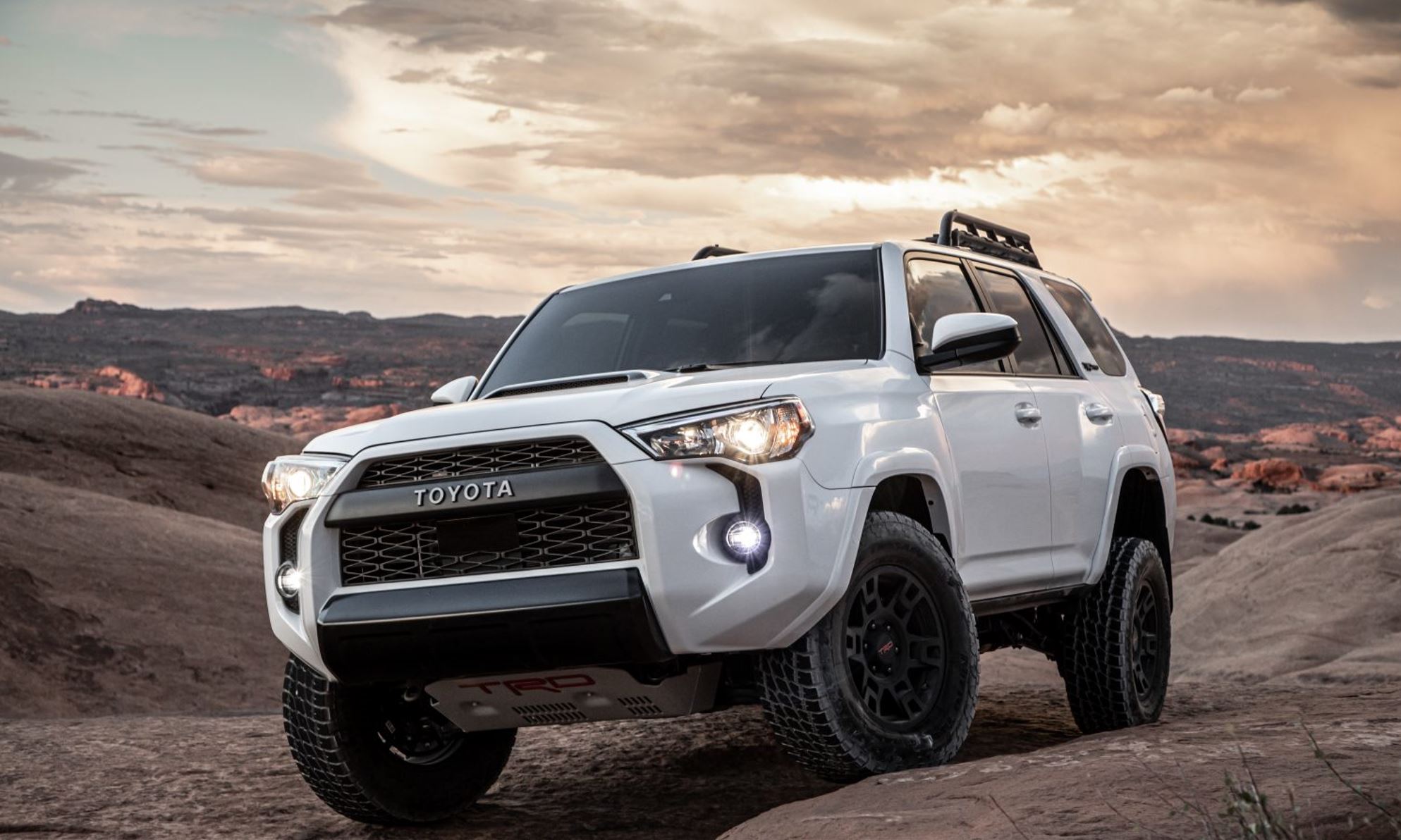 The Toyota 4Runner is a legendary machine that has been built to stand hard as a rock with its old-fashioned body-on-frame chassis and a solid rear axle. The 4Runner was initially launched in 1984 and has received four design updates ever since. The last design update was made back in 2010, and till 2022, the 4Runner has been on the market with the same looks.

The 4Runner comes with a 4.0-liter V6 coupled with an old-school 5-speed automatic gearbox which makes 278 pound-feet of torque and 270 horsepower. This engine remains standard on all trims and provides a maximum towing capacity of 5000 pounds, which is enough for hauling small to medium trailers. Fuel economy is dreadful, rated at 16 mpg in the city and 19 mpg on the highway, and so is the 0-60 mph acceleration, which takes about 8 seconds.

The 4Runner, as a mid-sized SUV, focuses on providing value for money. It defines practicality, economy, and style on a budget. With a low maintenance cost and high service life, the Toyota 4Runner maintains its reputation as a successful family SUV.

Available in 10 colors, and 8 trims, the 4Runner provides plenty of options for the customer to choose from. And whether it may be the SR5 or TRD Pro, the 4Runner never fails to deliver on any journey.

As a 5-passenger mid-sized SUV, the Toyota 4Runner tends to be an ideal, low-maintenance and reliable family vehicle. Adding an optional third row increases the overall seating capacity to 7, but those two extra seats are for kids only with a legroom of 29.3 inches. But the legroom in the front row is decent at 41.7 inches and tight in the second row at 32.9 inches. Cargo space, however, is sufficient for a family of 5, with 47.2 cubic feet of space behind the second row.

Then there is the 4Runner TRD Pro trim; an off-road veteran. Equipped with hardcore suspension, the 4Runner TRD Pro makes its way across the meanest trails without tripping. Specifications include a part-time 4WD system with traction control, hill-start assist, multi-terrain select, crawl control, all-terrain tires, Fox high-performance shocks, tuned springs, a heavy-duty skid plate, and a locking rear differential. It also turns heads with exterior badging which says TRD Pro all over the body and interior.

Overall, the Toyota 4Runner provides a balanced combination of practicality and drive, with zero compromises on off-road capability. 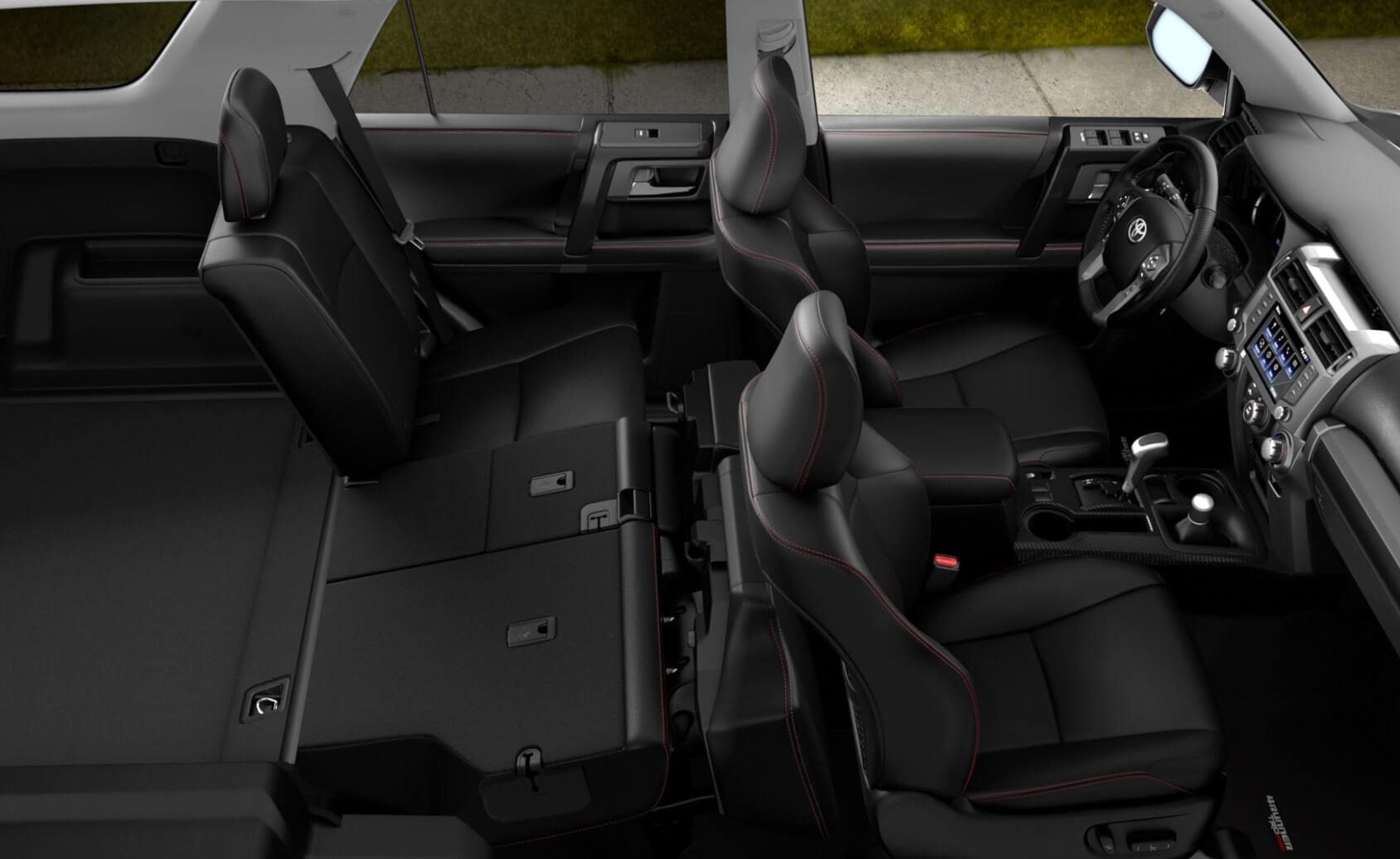 Pros/Cons of the Toyota 4Runner

Other Alternatives to Consider

The Toyota FJ Cruiser was successful back when it was launched, but now due to lack of updates on design and features, the FJ Cruiser is not worth buying anymore.

On the other hand, the Toyota 4Runner is a practical and reliable SUV with proven off-road capability, but it lacks the modern road refinement other SUVs offer. Consider the alternatives the market has to offer before you decide on buying one for yourself. 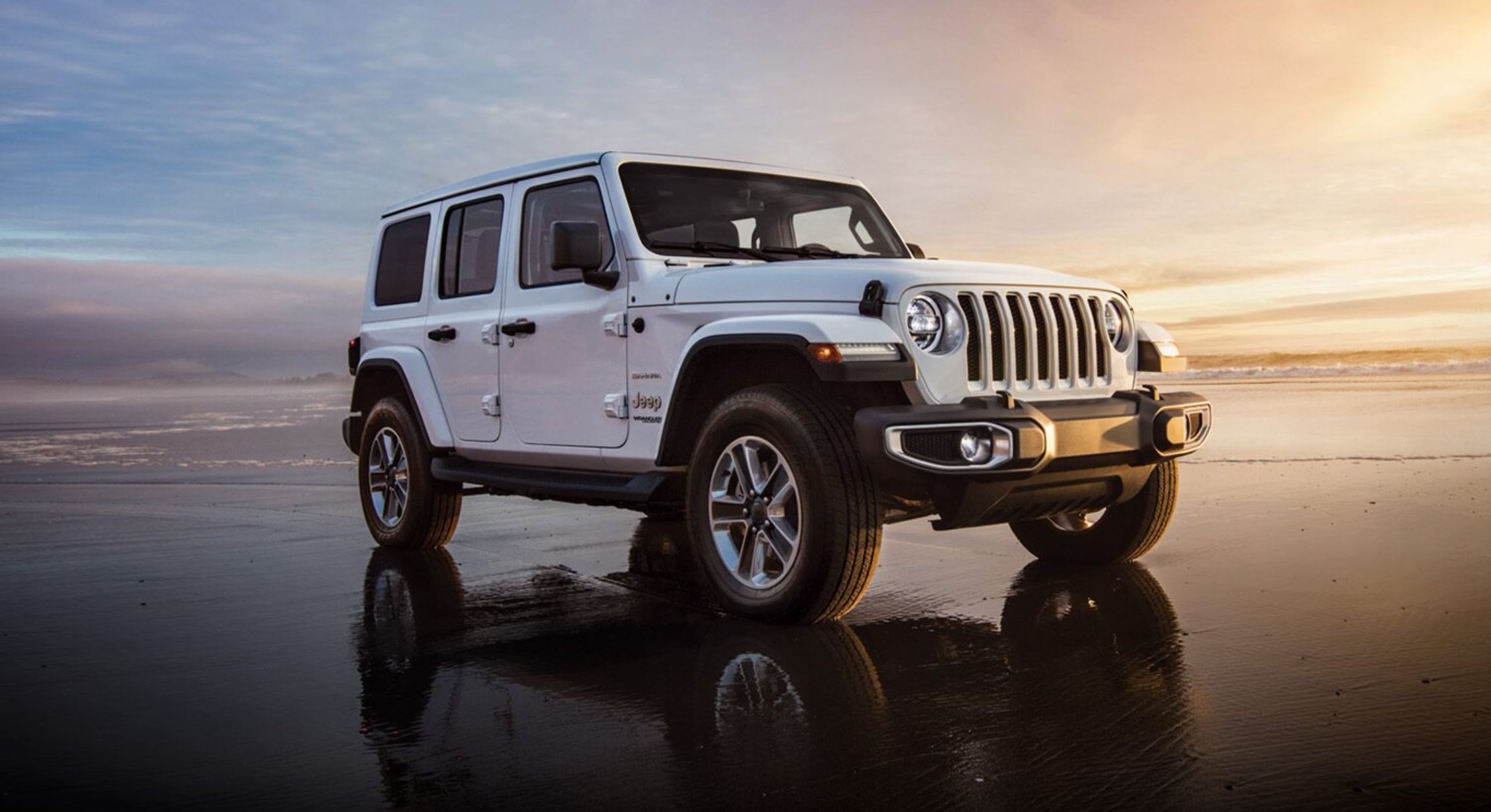 The Jeep Wrangler combines serious off-roading with an adventurous ride with its removable top and doors and foldable windshield. The Jeep Wrangler turns heads with its iconic look and enjoys a huge fan base thanks to its rugged personality. Moreover, it comes in several trims and powertrain options, allowing you to be very specific as per your requirement.

The powertrain options start with a 2.0-liter inline-four turbo, which is suitable for medium power requirements. Thirsty for more? Well, you can go for the 3.6-liter V6 or the 3.0-liter turbodiesel V6 for maximum torque. A hybrid powertrain is also available for people looking for a fuel economy without compromising on 4×4 capability. Not enough? Then learn to tame the 6.4-liter Hemi V8 powered Wrangler Rubicon 392, which boasts 470 pound-feet of torque and 470 horsepower, clocking 0 to 60 mph in just 4.2 seconds. This is the meanest Wrangler you can buy.

Add the Xtreme Recon package to it to uplift your Wrangler with 35-inch all-terrain tires, a 4.88:1 axle ratio, a 1.5-inch lift kit with tuned shocks, and a reinforced swing gate. Altogether, the Xtreme Recon package increases your overall off-roading dimension; approach, break-over, and departure angles now stand at 47.4, 26.7, and 40.4 degrees, while water fording ability and ground clearance jump to 33.6 and 12.9 inches, respectively. All engines have a tow rating of 3500 pounds.

The Wrangler can take on any terrain, any time. It is more than just an SUV; it’s a lifestyle. Loved by the young and praised by the old, everyone seems to enjoy the Wrangler. And since it is loved around the world, the Wrangler has thousands of aftermarket customizations available. It also enjoys a great resale value. 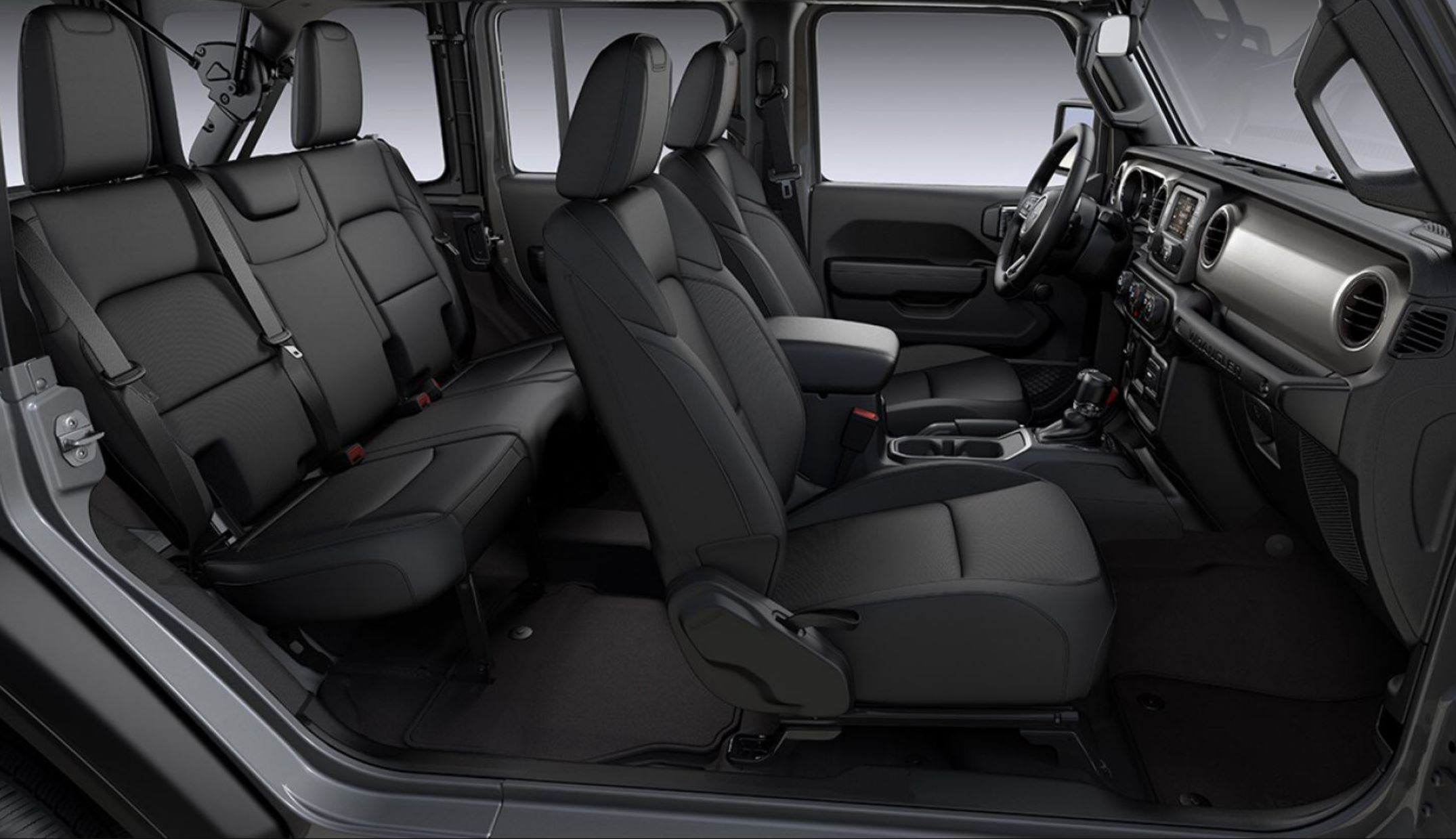 However, it has a downside; the removable top and doors allow the interior cabin to be reasonably loud on the highway, making long drives a headache. Moreover, the sluggish steering and stiff suspension, which may be favorable off-road, would not please you on your way to the grocery store. It is a matter of give and take here; the Wrangler is perfect for enjoying off-road adventures, but as a daily driver, it fails to deliver comfort.

Overall, the Wrangler is at the top of the game when it comes to serious off-roading. However, its cramped interior, lack of modern features, and unrefined road manners make it unfavorable as a daily driver. 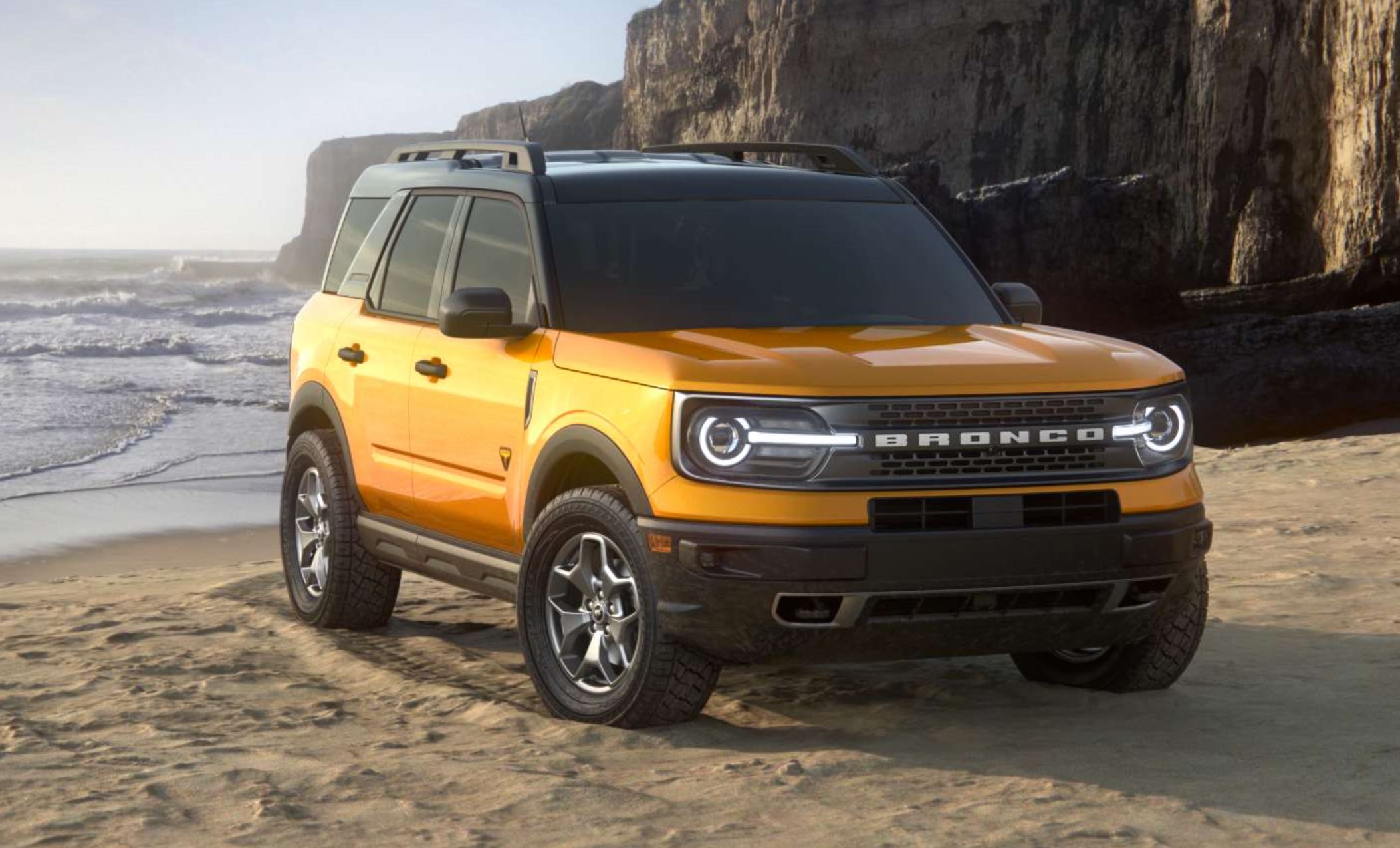 The Ford Bronco enters the market with one thing in mind; adventure. Following the footsteps of the Wrangler, the Bronco shares similar features, such as a removable top and doors. With chunky looks and a rugged build, the Bronco stands strong with the competition.

Three engine configurations are available; a 2.7-liter twin-turbo V6, a 2.3-liter turbo, and a 3-liter twin-turbo V6 which produces 440 pound-feet of torque and 418 horsepower coupled to a 10-speed automatic or 7-speed manual gearbox. All engines are rated with a towing capacity of 3500 pounds, which can be increased to 4500 pounds with the Bronco Raptor trim. 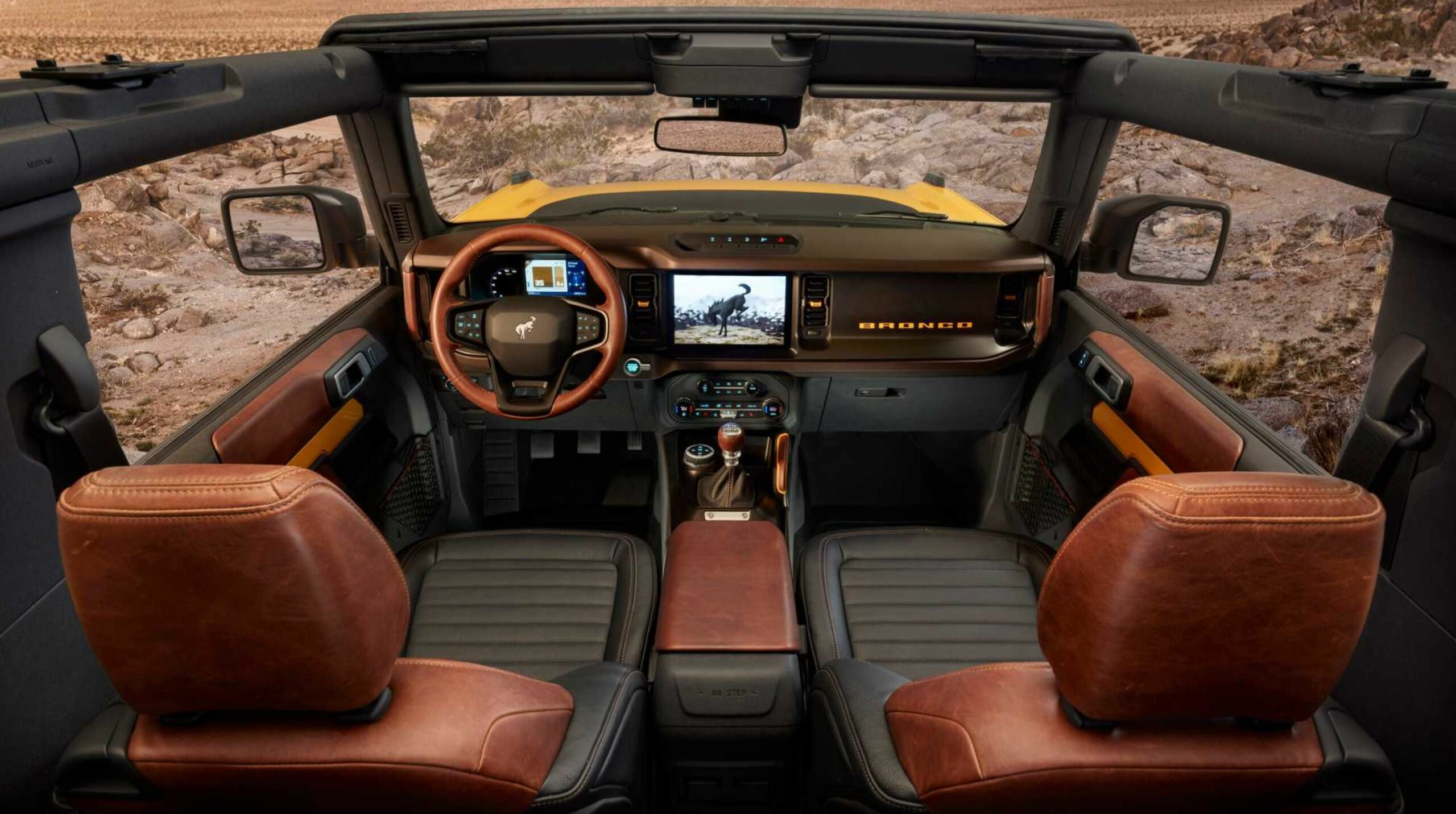 The Ford Bronco still carries a noisy cabin, but the drive quality, cargo capacity, and comfort are better than that of the Wrangler.

Answer: That depends on you how well you manage your vehicle’s due maintenance. A Toyota Tundra ran 1 million miles, and when Toyota tested that specific model, it was 99% as good as new. Similarly, the Toyota 4Runner is made to outlast years of workload; all you need to do is make sure it gets its due maintenance on time.

Question: Why did Toyota discontinue the FJ Cruiser?

Answer: The FJ Cruiser was discontinued by Toyota due to decreasing sales. The idea of a second-generation FJ Cruiser was therefore dropped for the same reason.

Answer: Unfortunately, the FJ Cruiser was discontinued in 2014. However, you can buy a brand-new FJ Cruiser in the Middle East, but that is the same model that was sold in the U.S back in 2014.

Question: How many miles will FJ Cruiser last?

Answer: The FJ Cruiser will easily manage more than 300k miles, provided scheduled services and maintenance has been carried out.

Question: How many seats does an FJ Cruiser have?

Answer: The Toyota FJ Cruiser has a standard seating capacity of 5.

FJ Cruiser vs 4Runner: Which One Should You Buy?

The Toyota FJ Cruiser is a fun vehicle made for serious off-roading. Although it has been discontinued, its demand is rising. On the other hand, the Toyota 4Runner is actively on sale, and you can get your hands on a brand new one with your desired specs.

In summary, the 4Runner offers better drive quality and comfort, plus it’s equipped with the latest safety and driver-assist features. The FJ Cruiser does not stand a chance with its outdated design and equipment, but it sure does look cool.

Overall, the 4Runner is the winner in the current scenario.

Zabrain Arshad
Zabrain has a passion for adventure and exploring places others don't go very often. It's only natural that his favorite type of vehicle is a 4x4. He loves bringing that passion to 4x4 Reports and staying connected to the vehicles and adventures he loves.